In this post I will attempt to explain how I used Pandas and Matplotlib to quickly generate server requests reports on a daily basis.

Problem To Be Solved: Generate a Scatter plot of the number of requests to a particular URL along with the 99th, 95th and 90th percentile of requests for the duration of a day. 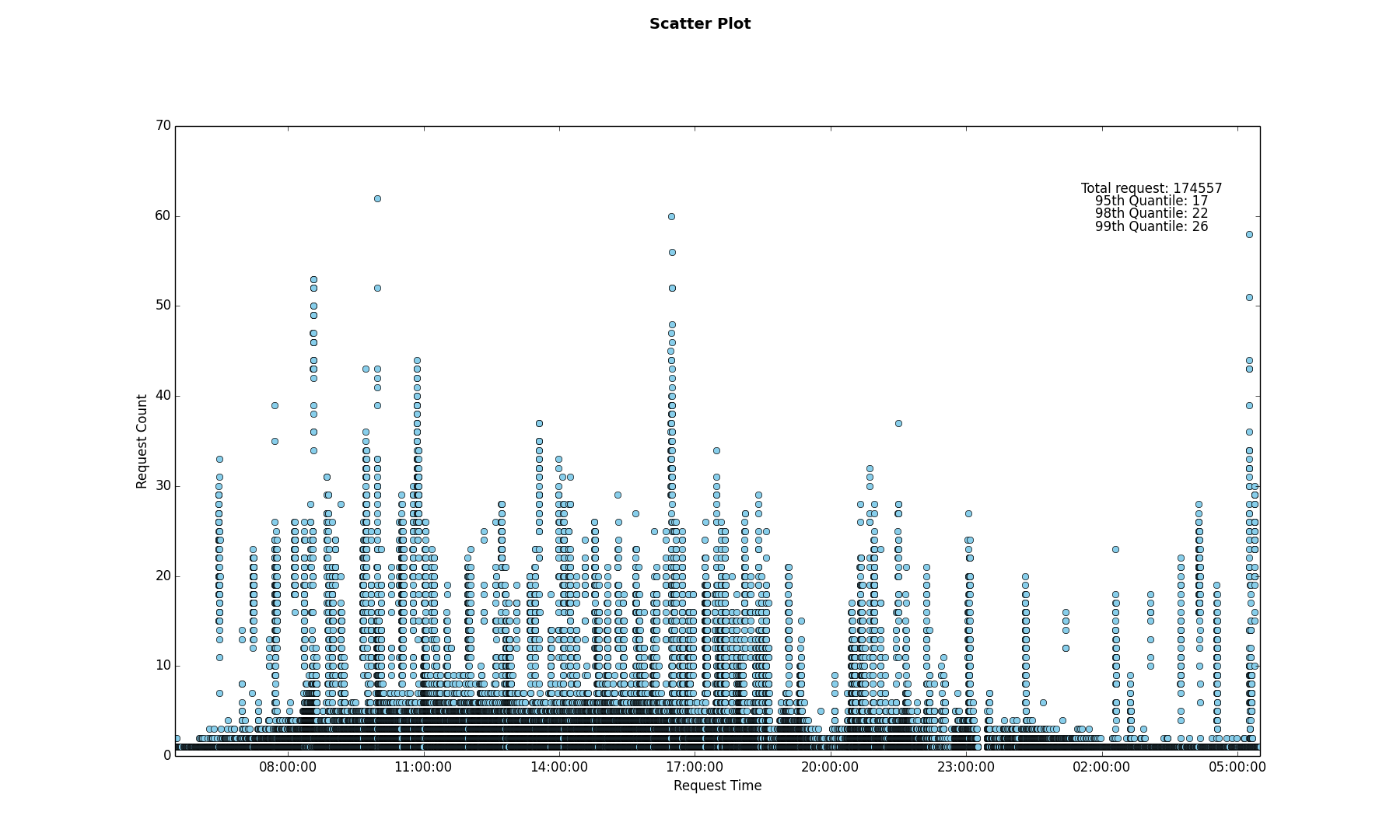 In this post I will leave out the details related to point number 1 and will concentrate on the remaining points. Since this was a fairly mundane task and had to be done daily for a couple of weeks, I intended on automating the process as well as generating the scatter plot as quickly as possible.

Let’s assume the input file contains only timestamps and the file has been read into a list using the following code.

Since the x-axis of the scatter plot will contain timestamp values, the lines List which currently contains string values, needs to be converted into a List of timestamp values. My initial instinct was to use an explicit for loop. In an effort to speed up my script I came across python’s built-in map() function and the concept of List comprehension which reduce the for loop overhead when the loop body is relatively simple, check here for more details. After a bit of benchmarking I settled on using the List comprehension method.

In this aggregation step the goal was to perform a group-by on the timestamps in order to calculate the number of requests per second. To achieve this I used Numpy which is a package for scientific computing and Pandas which is a data analysis library. The Series and DataFrame objects from the Pandas library and the ones() method from the Numpy package are used to generate the data structure show in Figure 1, the code snippet below contains the details.

Note: I could have probably achieved the same result using only Pandas.

The DataFrame object is a tabular data structure with labeled rows and columns, you may think of it as an Excel Spreadsheet. After creating the DataFrame df you will end up with a structure as displayed below. 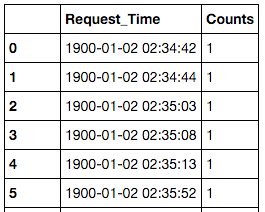 The next step is to group-by the Request_Time column and sum up the counts, this is achieved by calling the groupby method on the DataFrame object.

This gives us an aggregated DataFrame as displayed below 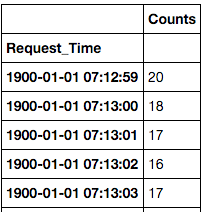 The Scatter plot is generated using the Matplotlib library. Since we are plotting timestamp values on the x-axis we will use the plot_date() method.

Note: The Matplotlib library contains extensive documentation on all it’s API’s as well as a vast array of examples, hence I will refrain from going into more details in this post, you may check this link for more details.

The snippet below contains code related to rendering the Scatter Plot. I have taken a very simplistic and naive approach since it was good enough for my requirement.